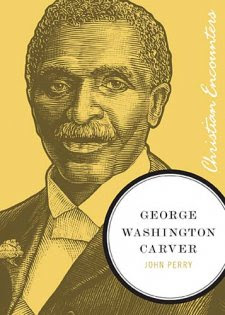 George was the son of a slave. He and his mother were kidnapped by raiders when he was very young. His owner, a reluctant slave owner, hired a tracker to find the pair. The tracker was unable to locate George's mother, but found George abandoned and brought him home. The Carver family adopted George and his older brother and raised them as their own sons. When George had acquired all the knowledge he could at home, he set out from place to place to do a very difficult thing at that time. He sought to get an education as a black man. He perseveres to become a professor and leader of the Civil Rights movement. He found nearly 200 uses for the sweet potato and 300 for the peanut. He attributed his success to one thing. Prayer. He simply asked God to unveil the mysteries of His creation.
I must admit to you that I have a bit of a historical crush on George Washington Carver. I have admired his tenacity and the grace with which he faced his problems. He was a gentle man who loved learning. He was a discipler of people in the love of learning and in God's word. He showed that African American men were worthy of equal rights by displaying intelligence with great dignity. I highly recommend learning all you can about him. He is a beacon for all of us as we live in a world with few role models in the faith, especially in science. My only complaint about John Perry's work on the man would be that it was too short.


This book was graciously provided by Thomas Nelson Publishers for review.