The Cadillac of Lawn Mowers 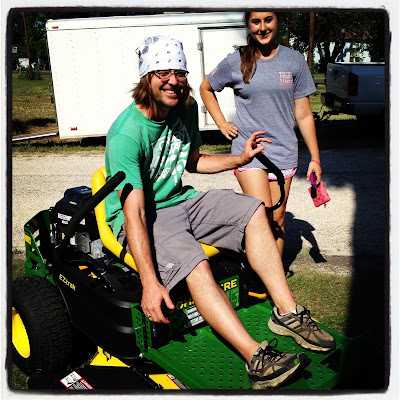 I know I have much catching up to do here on the blog after the summer on the mission field of camp. The phone service is basically non-existent and the internet is a trifle sketchy. Even though I am constantly surrounded by people and counseling people, it can be quite lonely. Every single person there, including my man is so busy that there is no time for a good chat. I do love a good chat. I mean, I just had a three hour breakfast with one of my besties at IHOP. (Don't worry, I left a big tip for hogging the table.) Anywho, back to the point of this post.

At first we had a single push mower to mow our two acres. Then we were given a professional double push mower. After it flaked out, we were given an older riding mower. It was such a gift, but as things age, they get janky. You know what I mean. One side of the blade would scalp the yard and the other side would leave it 10 inches high.We kept trying to repair it, but it looked like we had crop circles when we mowed.

One morning this summer, staring out at said crop circles, I asked the Lord to either truly fix our mower or grant us a new one. Guess what showed up a few hours later. Yes, friends, that right there is the Cadillac of mowers. My husband has been yearning for one more than a new car to replace his 98 Honda. He cried. Then, He whipped about the yard like an Indy race car driver. That thing is so fun. Bless the Lord. We are so thankful to Jesus and the generous hearts he gifted the Devault family with. Thank you, Jesus.

It Was No Keith Urban.

My man and I went to see Keith Urban at the 360 Ampitheatre at the Formula One Raceway the other night. In the time slot that I should have been listening to and staring at Keith Urban, I was instead staring at this lady in what they dubbed the "panic room." First order of business, 360, if you don't want people to panic, do not tell them that they are headed to a panic room. Second order, actually train your employees in where they are to evacuate people to. It was a nightmare.

As you can guess, there was a huge lightning storm that came up as we were listening to the opening acts. So, we were somewhat escorted to the Formula One garages. That would have been cool if we were not in there with 15,000 drunk smokers tossing around the f-word more than I say "shug." That's quite a bit, people. It was a mile walk there and back in the rain. As we passed the huge barbed wire security fences, Denbigh told me he smelled a government conspiracy. All I could think about was Auschwitz. There were crazy vendors following us selling beer the whole time as well. At one point, a man in the crowd shouted and pointed at Denbigh saying, "Keith is in here!" Of course with the hair and build . . . and the drunkenness, the ladies erupted in screams.

We were some of the first people out so we ended up at this little section of a dozen tables overlooking the amphitheater that was full earlier. I was glad because the herd of people was piling up at the gate ready to run in. We sat there for forty minutes before they cancelled the show. Even though the smoke of the guy next to me was invading my nostrils, he was making me laugh. When they let the crowd back in, he started mumbling about it being like the running of the bulls of Pamplona. He was shouting to the thousands of girls below him, "Slow down, little girls. You'll get to him."

On our way back to the car, we, decked in white, got stuck int the mud. I literally had to grab on to a concrete pylon and pull myself out at one point. The diva (Denbigh) was all tossled and his hair was a mess.

We had babysitters and we were alone. Other than that, it might have been in our top two worst dates ever. There have only been two bad dates. The other was when we went and saw Eight Crazy Nights.
Atleast we have a funny story about being herded to a panic room. 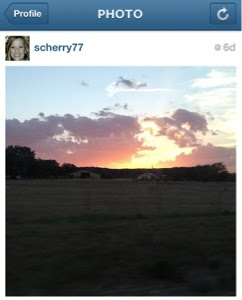 Poet Mary Oliver called the morning sun "the best preacher that ever was." I would say because the glorious day cuts through the dark night. I would have to say that the evening sun is quite the preacher as well. The last shout of vivid, glorious day beckons our weary souls to remember through the night. I honestly think of this line nearly very day. The heavens preach the gospel to me. May it remind you as well.

“Why I Wake Early

Hello, sun in my face.

Hello, you who made the morning

and spread it over the fields

and into the faces of the tulips

and the nodding morning glories,

and into the windows of, even, the

miserable and the crotchety –

best preacher that ever was,

to be where you are in the universe

to keep us from ever-darkness,

to ease us with warm touching,

to hold us in the great hands of light –

Watch, now, how I start the day

in happiness, in kindness.” 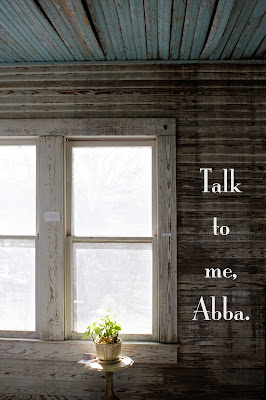 As the waves of summer pass over me, I find myself looking for solitude to process, to reflect, to rejuvenate. We have been entrenched in warfare. We have been praying for souls to be won for Christ and He has been working. He has been winning. There is always a backlash from this sort of thing. I find myself walking and praying. I often utter the same phrases over and over. My thoughts as a mother of three constantly in travel mode ministering in chaos are not always intelligible. So, I simply say, "Maranatha." Come Lord, Jesus. Come to this place. Come to my neighbor's  house. Come to this worship center. Come to my weary soul. I know God is everywhere, but this is a deeper thing I am crying out for. I cry out for the Spirit representation of the Son of God to come into the core of all I can see or feel or think about. When I have no good or beautiful words, Come Lord Jesus. When my mind is so full that I cannot think of what to pray for my friend, Come Lord Jesus. When I am aching in the core of who I am for someone I love, Come Lord Jesus.

There are words, and groans, and phrases, a symphony of Spirit grace and mercy.

Our Lord has come.