Bird by Bird by Anne Lamont 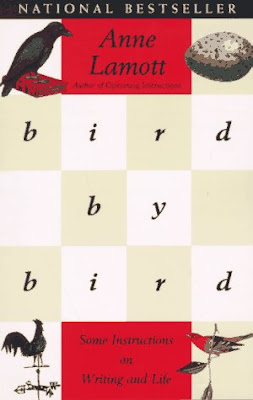 "A writer is someone on whom nothing is lost."
-Henry James
Anne Lamont has given us one of the most witty and insightful books on writing that I have ever encountered. I found myself underlining most of the book as I gleaned how to write and how to live. One of the portions that spoke to me was about learning character development. You cannot write a character into a plot. You must let the character develop into a plot and see where it takes you. This advice is for writing fiction, but I saw it as good real life admonition. We often try to fit others into the plot or role we desire for our lives instead of encouraging and allowing those in our lives to develop naturally and fluidly. Embrace the character.
The title of the book came from her father giving her brother advice on a report that was due the next day (one he had not even started). He was so overwhelmed by the many birds he had to discuss that he could not even begin to write. His father told him to relax and "take it bird by bird." I need to remember that myself.
Anne is witty, raw, and full of vulnerable humanity. I would recommend this book to all writers and people who desire to tap in deeply to the creative intuition that exists within us. Anne is a born again Christian and recovering alcoholic. She has written many books on faith, on writing, and several novels.
If you are trying to find answers in Eat, Pray, Love, I would highly recommend that you indulge in some Anne Lamont instead. She found what she was looking for.
"There is ecstasy in paying attention."
-Anne Lamont
"So you may have gotten into the habit of doubting the voice that was telling you quite clearly what was really going on. It is essential that you get that back."
"My deepest belief is that to live as if we're dying can set us free. Dying people teach you to pay attention and to forgive and not to sweat the small things."
Email Post
Labels: Books

Emily said…
Good review! I have been working my way through this book for a couple of weeks now... She is an enjoyable read.
7:18 AM