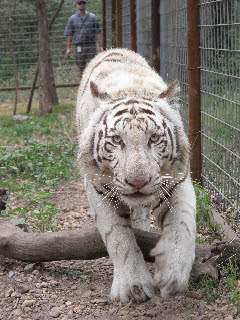 Beautiful Stephanie is very tired tonight and not feeling all that well, so as her protective husband, I'm standing in the gap for her.
Today, we were running some errands around South Austin, so we decided to schedule a trip to the zoo as well.  There are actually 2 zoos in Austin, which is kind of surprising.  We've been to the zoo in west Austin before.....quite a let down.  I got challenged and nearly attacked by a baboon, and we went on a lame train ride....that's about all I remember from that visit.  There is another zoo on the east side of Austin, kind of close to Bastrop, and that's where we went today.
As we drove out to the zoo, which was in the absolute middle of nowhere, the first thing we noticed was the mile long entrance of gravel.  No, not even gravel....big, heavy rocks.  This wouldn't have been such a concern, but earlier in the day we had a flat tire and were worried about it going flat again.
The zoo itself was decent enough and pretty diverse......snakes, turtles, a croc, all kinds of deer, antelope and goats.  Plenty of birds, peacocks, bats, a few monkeys, even a lion and a tiger.  It really wasn't all that bad for a zoo in the middle of nowhere.  It just kind of seemed like.....not a zoo.  More like a some guy's acreage that he decided to build some shabby fences and cages to hold his pets in.  I kept looking at some of the structures and praying that they would hold up....at least until we were back in the car.
I also had to witness the owner yelling at one of the girls who worked there.  She had taken her boyfriend in the lion's den (how's THAT for a metaphor), and the owner was really upset....something about liability, a $3000 fine and her possibly getting fired.  Anyways, kind of an awkward thing when I'm standing there with my girls.
Overall, it wasn't that bad, but if you can make it San Antonio or even Waco, you'll get a much better zoo experience.  However, if people keep going into the lion's den, you just KNOW that something YouTube worthy is bound to happen.  :)
Denbigh