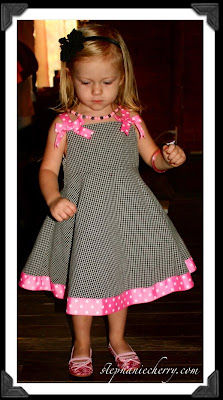 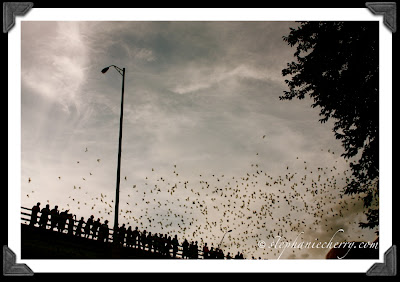 The largest urban bat colony in North America is located in Austin. It boasts 1.5 million bats. A few years ago, we saw the bats, after eating, from the top of the bridge. They came out for an hour and a half. This year, we decided to take advantage of the Austin American Statesman's free bat parking (after 6 p.m.) and have a fantastic picnic. We arrived at 6:30 and got a great spot on the grassy knoll between Lady Bird Lake and the Statesman offices. The blankets were laid out and the culinary fare did abound. The bat information that I saw on the web said that the bats come out around sunset. They actually start heading out around 7:30 and it goes on until after dark. August is said to be the best bat viewing because all of the bats that were born in June are now also flying. There are no public bathrooms at this locations. Go before you come. You can also see the bats from TGIF on Congress. Next year, I think our family will try the river boat cruise.
The people watching and glowing light sabers make the grassy knoll worth the visit!
Blessed Bat Watching!
More Bat Info
MapQuest 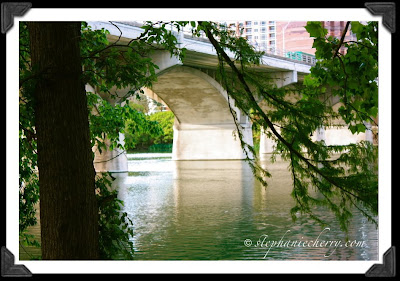 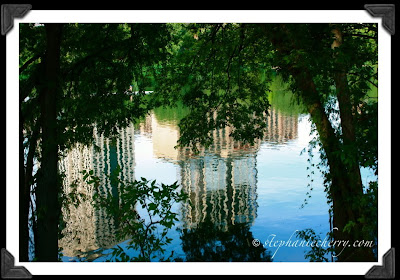 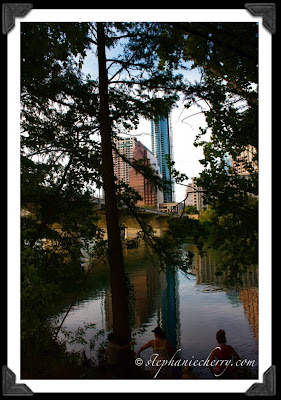 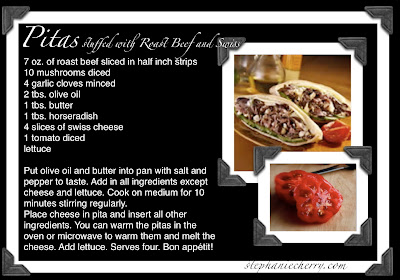 Do You Want A Friend? by Noel Piper

Additional post below this review.
I thoroughly enjoyed reading each page of this book to my little girl. With each turn, we would see the attributes of Christ's friendship and the Scripture to compliment it. It is a simple and easy to read format that a child can readily understand. I love that we can read scripture to her and that her mind is saturated with it. Like any book your child loves to read, they can repeat it back to you word for word. The colors and illustrations are brilliant. Five Stars.
at August 17, 2009 No comments:

A Bend in the Road 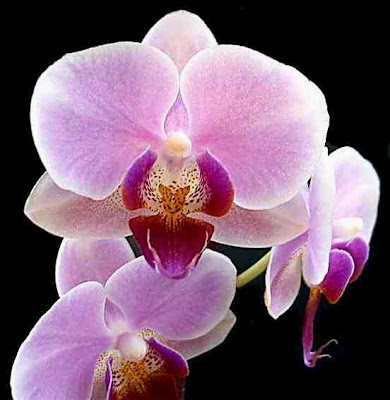 Yesterday, I delighted in wearing my grandmother's pearls to the market. I saw a woman there buying brilliant red gerber daisies. I liked her right away . . . knowing that she must have a vibrant zest for life. We never spoke.
"I have been married for six years," I thought as I sat in the church we were married in. Celebrated at the same place we went on our first "date" to. It's not the same eatery we first dined in, but it was still lovely. Things change so much and go so fast. My grandparents ranch has a for sale sign in front of it. People lived there. I stared at things my grandparents owned for sale in antique stores. I knew the stories. Perhaps that's why I love antiquing. Stories. Life. I bought a beaded evening bag that I fully intend to carry in the day. I wondered if some of my deceased family members that sat next to me in church on Sundays growing up are really in heaven. How can people say words like fag, nigger, or that they hope others burn in hell call themselves Christian? How could I do some of the things I did and call myself one? I would tell you that I am an avid reader, but rabid is a better word. I was lost in Redeeming Love this week. Tell everyone to get this book and learn to love when it hurts and actually costs you something. I get Sarah. She was eight. I was five. The reconciliation to God had been more painful and unbelievable than the injuries. She learned to trust and live vibrantly. She learned to sacrifice and celebrate her healing . . . by giving it away. She built a house for people to stay in for healing. I connected with that. I want people who are injured and feel weary from their journey to come here, rest, and eat food drenched in healing butter. If I can only do one thing with my life, let me bless you, Lord. I have gone from Francine River's Redeeming Love to Francis Chan's Crazy Love in the last twenty-four hours. I was mesmerized in the first few pages. I wonder if most of the people around me are serving God to be noticed. When we focus so much on the spiritual warfare and all we endure, we rob God of the glory and praise He is due. I wonder if church is too easy. I wonder who of my friends are making secret sacrifices. I wonder who is discipling, loving, and praying. Do you think we should do things in a public ministry if we do not do them in a private one? If we do not sacrificially disciple one on one, should we ever be brazen enough to teach publicly? Though we say we glorify God with our mouths, does our need for recognition betray us? I feel betrayed myself . . . perhaps dying on a vine. I had to make a list of my wounds this week in The Mind of Christ. They were all by Christians. What are we doing? What kind of Christ are we showing to this dying world? What kind of Christ are we showing each other? What happened to John telling us they would know us by our love for each other? What happened to counting our brother ahead of ourselves? We are jockeying for position, mass teaching without intimacy. Christ hangs His head. When will you simply be Christ at home? When will you respect your husband, quit yelling at your children, and minister to the people in your family that you hate to be around?
When will I? Feed my sheep. All of them.
www.stephaniecherry.com
at August 14, 2009 3 comments:

Denbigh took me to see Julie and Julia yesterday on our sixth wedding anniversary. I thoroughly enjoyed it. Mostly, I must say, because it touted one of my life's mottos, "Butter!" This movie tells the two tories of two women who had no idea who they were or where they were going. Discouragement had come over and over. Through life, love, and, of course, butter, the overcame their circumstance to embrace passion. I highly recommend it. Perhaps you are looking for something more in your life and need a touch of inspiration. Check out this movie. There are a few curse words, Christian friends, but nothing vile or vulgar. Enjoy!
at August 10, 2009 3 comments:

Congratulations to Carla Thomas of Waco, TX! You have won a complimentary copy of
the Jesus test by Robert Barge.
Keep checking in every Tuesday. We will have more contests soon! 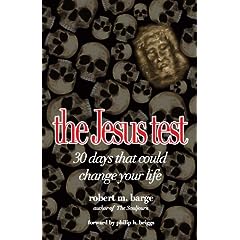