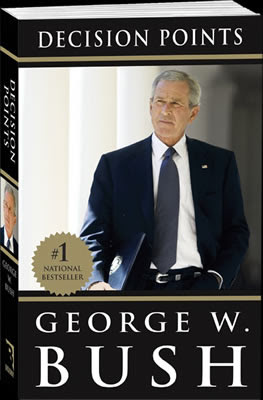 Decision Points is not your typical memoir. George did not try to write it as a series of events that happened while he was in office or as a long list of facts about his life. He wrote it from the perspective of his human experience as the President of the United States. He carried the country through 9/11, war, and held strong to his beliefs in key decisions.

A friend of mine told me that this was a good read regardless of whether you are in agreement with George W. Bush's politics or not. I have to agree. I personally thought he did an excellent job as our govenor. He achieved all of the things he said he would do in his campaign. Then I watched the media rip the man to shreds as he was in the office of president. I enjoyed reading his perspective on the events he faced. He really shows you his humanity and the struggles he went through trying to serve our country. He speaks of his life, the people who became dear to him, the people who betrayed him, and the hard lessons he learned. I came away with a new and improved view of George Walker Bush. I can see that he is not the man the media portrayed him to be. He is intelligent, thoughtful, and compassionate. This truly is an excellent read regardless of your stance on his decisions.

This book was graciously provided by Waterbrook Multnomah for review.

Hi Stephanie, I hope you are doing good. I just read through your 2009 blogs. Each one speaks to me in a new way. I love reading through your blogs when I am feeling down, they always lift me up and encourage me. Thank you. I hope all is well. I love you and your family. :)

Thank you for encouraging me. It is such a blessing to know that what I am doing is blessing someone. I do not like to hear that you are feeling down though. I am praying for you to have joy and the peace of the Holy SPirit to minister to you. Love you too.