A Treasury of Sherlock Holmes

I’m sitting in my church late at night because I’m sleeping here with my favorite homeless ministry, Family Promise. I brought along my classic to read for 2018. I am trading in La Mancha for Baker Street. As Don Quixote and Sancho Panza ride into the sunset, Sherlock Holmes and Dr. Watson appear on the scene. I’m reading A Treasury of Sherlock Holmes compiled by Sir Arthur Conan Doyle’s son, Adrian Conan Doyle. I learned so much simply by reading the introduction. It is said that by reading one book a year that you are among the world’s most educated. What will you be reading in 2018? #drwatsonipresume #books #bookstagram #bookworm #drwatson #sherlockholmes #classicliterature #volunteer #familypromise #rocks
A post shared by Stephanie Cherry (@heystephcherry) on Jan 2, 2018 at 9:24pm PST


In January of this year, I picked a classic out of a set my dad bought us when I was a little girl. I had never read all of the Sherlock Holmes stories. Let me just say that I was captivated by his writing. In this particular collection put together by his son, there are two novels and 27 stories. It was truly hard to put this down. I love how characters in books help you appreciate the eccentricities of people in our real lives. Seeing mystery and story unfold helps me appreciate the unfolding of my own life. We often fight the developing of our own beautiful stories. "We have not yet met our Waterloo, Watson." *Meaning our end has not come...from Napoleon's defeat at Waterloo. There is a reason for every mystery. We can often find answers in story that we would never find in a text book. That is because life is living, not dissecting.

What are you reading? I am reading Raising Passionate Jesus Followers by Phil and Diane Comer and Everybody Always by Bob Goff. I think my next classic will be The Hunchback of Notre Dame. I'm in search of a classic copy. Love to y'all. Happy reading. May God use everything you mentally ingest for his glory.

The end of a good book is always a bittersweet dichotomy. After 686 pages of 2 novels and 27 stories, I don’t want to leave Sherlock Holmes and Dr. Watson. The bright spot is that when one book closes, another opens. Up next, Bob Goff’s new book, Everybody Always. What are you reading?📚
A post shared by Stephanie Cherry (@heystephcherry) on Feb 24, 2018 at 10:44pm PST 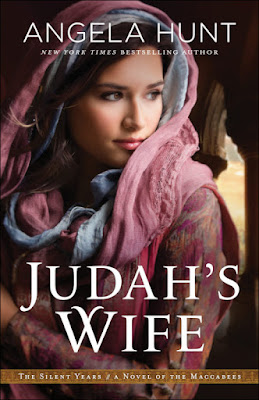 If you have ever wanted to know more about the Maccabees, this is a fascinating read. This story occurred during the silent years between Malachi and Matthew. In the narrative of I, after Antiochus IV issued his decrees forbidding Jewish religious practice, a rural Jewish priest from Modiin, sparked the revolt with rebel Jewish warriors against the Seleucid Empire by refusing to worship the Greek gods.

I remember the first time I heard this story and I can see now that it was quite slanted. AS I read the story and studied the history, some things had been omitted and some details had been added. For instance, I had no idea how brutal these Jewish warriors were. They were beheading people and slaughtering people who oppressed Jewish worshippers. I had no idea how many battles this revolt entailed and how gruesome they were. The small Jewish army defeated large opposing forces with superior weapons repeatedly.

The Jewish festival of Hanukkah celebrates the re-dedication of the Temple following Judah Maccabee's victory over the Seleucids. According to Rabbinic tradition, the victorious Maccabees could only find a small jug of oil that had remained uncontaminated by virtue of a seal, and although it only contained enough oil to sustain the Menorah for one day, it miraculously lasted for eight days, by which time further oil could be procured. According to our author, there is no historical evidence for this and may have been added for drama at a later date.

Reading about the how harsh Antiochus IV (remember him from Daniel?) was made me praise God all the more for religious freedom. He was having everyone who practiced Jewish law killed. If you circumcised your son, you were all killed. Jews were turning on Jews for fear of being killed by the government. Some of those in the priesthood were also corrupt. It is always disparaging to see the people who are supposed to be shepherding God's children killing them.

I thought the book was fascinating. Of course, there are added portions to make it a work of fiction, but all of the battles and events are true. I highly recommend it. It made the story remarkably real to my mind's eye.

Affiliate links are a great way to support the bloggers you love.
at February 12, 2018 No comments:

Yes, You Can Homeschool by Erin A. Barry 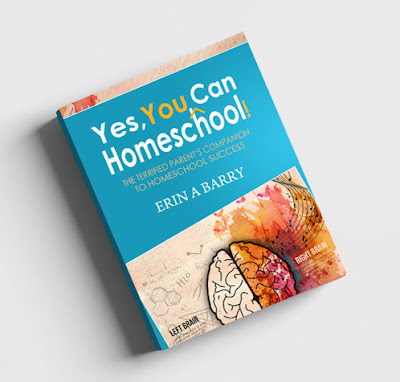 I have been homeschooling for ten years so I wasn't expecting to find much new information when I began reading this book. Thankfully, the thing I have learned in homeschool is to always be learning and willing to learn. Often we need to hear old things in a new way again. That is what Erin's book did for me. From teaching philosophy, to socialization, to the very heart of why we do this, I was encouraged. She breathed new life into an old game.

I think everyone should read this. It's full of wonderful ways to facilitate learning and the true end goals of education. It would be great for an educator as well as a prospective homeschooler. Truly the objective is to instill a love of learning. Erin's book is beautifully thought out and backed up with research. If you are a beginning homeschooler or needing a boon in your spirit to press on, pick up this book.

I personally highlighted about fifty sections. I thought I would share a few. 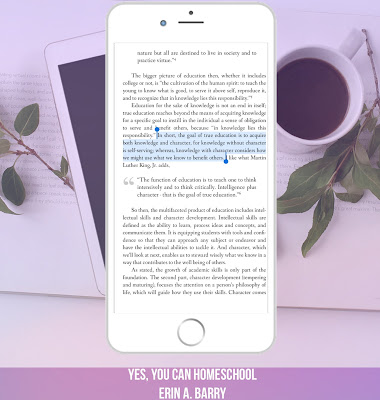 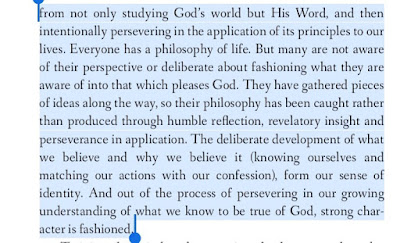 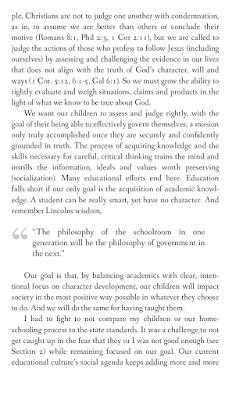 Are you wanting to homeschool but worried by such questions as, Will my children become social misfits? Will they get into college? Am I smart enough, capable enough, strong enough? What if I do more harm than good? In Yes, You Can Homeschool! The Terrified Parent’s Companion to Homeschool Success, education specialist and 20-year homeschooling veteran Erin Barry answers these questions and more. Packed with practical information and insight, and delivered via engaging stories and vulnerable life-lessons, this resource will empower any terrified parent to courageously venture on their own successful homeschooling journey.

You’ll also:•Find tips for raising up the whole child (build both brains and character!)•Discover the power of parenting from a Biblical worldview•Become informed of public education laws and how they affect you•Uncover the secrets of lead learning •Find your best learning rhythm•Realize the advantages of homeschooling

*Affiliate links are a great way to support the bloggers you love.

This book was generously provided to me by the author for review.
at February 06, 2018 No comments: