The Fourth Fisherman by Joe Kissack 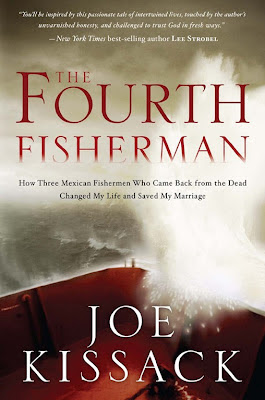 Perhaps you remember the story of the fishermen from Mexico who were lost and floating across the ocean for 9 months. Two men died and they were eventually found around the coast of Australia. It went largely unnoticed in the American media because of the barrage of politics at the time. A friend of Joe Kissack's told him to look up the story at the time it happened. He was then drawn into the story as though he had lived it. In some ways, he had. He was a man fully adrift, his life as he knew it vanished, and the crashing waves and storms of drugs and alcohol were crashing down on him.

You follow this story, which is impeccably written through Joe's Hollywood defeats and the tragedies of these fishermen and deliverance of these fishermen. The thing that survives 9 months at sea is the same thing that helped Joe survive his self-destructive lifestyle. One guy with a Bible. It was a different man in each circumstance, but it was a life-preserver for both of them. Joe finds these men and persuades them to let him tell their story. He quickly realizes that they are all part of one great story that belongs to an unseen God. I enjoyed how it was not preachy or trying to riddle it's pages with cliches. It told a story and it was told well.

I must say, I enjoyed this book immensely. The author's writing and communication style truly draw you in. The story that unfolds before your eyes makes you feel as though it is happening to you. You find yourself wanting to reconnect with Christ in the desperate way many of us first come to Him. You want to do away with every ounce of self sufficiency and take up the deep yearning again. You want to sanctify your spouse and be sanctified in humility. Grab a copy. Revel in the testimonies of these four men.

This book was graciously provided for review by Waterbrook Multnomah.