A Man's Search For Meaning by Victor Frankl 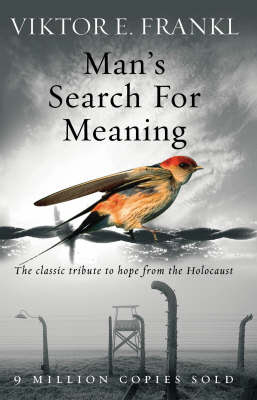 When asked what book has changed a person's life more than any other, a recent study reports, that A Man's Search For Meaning by Viktor Frankl is ranked in the top fifteen. I have heard is referenced many times and have often been struck by the depth of just a quote from the work. His struggle though four camps during the holocaust and his unique perspective as a psychiatrist are a fascinating read.

I must be honest. So much of this is over my head. It is something that must be read and reread to truly collect the nectar of the work. It is not something you sit down to skim on a lazy afternoon. Many times I would catch myself just sitting int the silence after each paragraph. His work is genius.

We are not told if Victor is speaking from a Christian perspective.  The book is not a definitive religious work, but in many ways it could be. He speaks to the recesses of the human condition and begs them to thrive. Every person has meaning and we find meaning in moving beyond self-preoccupation to the enrichment that comes from loving another. There is meaning in suffering.

The author tells us of his observances and personal reflections in different concentration camps. There were certain indications that people had lost hope. He tells us that once that happened they would die within two weeks. They had given up their will to live. One can suffer with great dignity. A person can humbly submit to suffering and find great meaning in it. "What is to give light must endure burning."

“Love is the only way to grasp another human being in the innermost core of his personality. No one can become fully aware of the very essence of another human being unless he loves him. By his love he is enabled to see the essential traits and features in the beloved person; and even more, he sees that which is potential in him, which is not yet actualized but yet ought to be actualized. Furthermore, by his love, the loving person enables the beloved person to actualize these potentialities. By making him aware of what he can be and of what he should become, he makes these potentialities come true.”