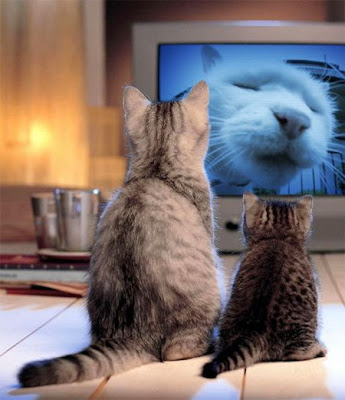 Due to the nature of being an itinerant worship leader, my husband and I travel about six months out of the year. During our 10 week stint of being gone, something funny happened. Now, let me preface this by telling you that in the small town where we are building our Respite, something funny is always happening. This however is a "cake taker."
In the spring, Denbigh thought our two new female cats were not old enough to get pregnant and put off having them fixed. They, of course, both became pregnant. They both had kittens and we inherited a cat that a neighbor abandoned. All total, we ended up with a whopping 14 cats! I had no idea how we were going to manage finding people to give all these extra cats to.
Mid-summer I had to come home for a doctor's appointment and I didn't see any cats. There was a full bowl of food an no cats. Until a few weeks ago we couldn't figure out where the cats had gone. One of our neighbors stopped by and told us that he had taken them all home and they were spending their days watching tv with him. Denbigh asked if we could have the adult cats back. The man tells Denbigh that he will just keep them. Denbigh explains that we would like our cats back. "Oh,"he said completely heartbroken. A few weeks later he shows up to tell us that the cats we wanted back mysteriously disappeared. Odd timing, don't you think?  I just laugh when I think of this man sitting at his house watching tv with ALL of our cats. Guess we need some new pets.
at September 08, 2010

ha ha!! That is a funny story! The man must be lonely and your cats must make great company! ha ha!

Where would all those cats just go that he can't find them? And what does that say about the poor guys life? We like cats, so I hope they are ok! (And I want a calico kitten!)

Oh Warren, I have no idea what to even think. We both tried to laugh it off. What do you do, call the sheriff? I hope they are okay too.