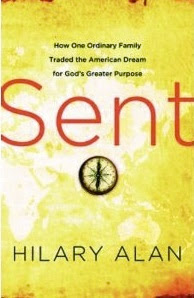 I was not immediately attracted to this book, but I was asked to review it and as I read the context, I was immediately drawn to it. God called them to leave a high profile career and go to help rebuild homes in Southeast Asia after the tsunami there. I wanted to know what God had done and how He led them on this journey. I wanted to know what He had shown them there.

This is Hilary's first book. It can be choppy in places. I imagine she was trying to condense the most powerful story of her life for this book. The story told itself however. It is gripping and convicting and challenging. This family slowly walked out of their lives to embrace the Muslim culture and serve them.

I have never seen the inside of this kind of story before. The length of time and all that was involved to even get over there was a little shocking to me. First the man prepared to leave his job. Then they went to classes, sold their home and belongings, and then entered into a period of preparing for immersion. Then, there was culture shock and loneliness.

I honestly cannot imagine being submerged into a culture so foreign to my own. Ours may not be perfect, but we are accustomed to it. Hilary wrote of how the people around them told them how much they appreciated the way that they dressed like the culture and how they were kind to them. Kindness was completely out of the norm to them.

This family lived among power outages and filth and continuing panic every time a wave rolled in. The thing I loved about this is that they were trying to love and encourage people around them right where they were. This wasnt some mission of getting people to do or say the right things. They were the hands and feet of Christ to a people that did not know Him.

One of the stories she told was of a friend there that had a miscarriage. In this culture, you have to be hospitable in this situation. So, immediaitely after this woman had lost here baby, a buffet was set up in her house. People were coming by all day eating food, but barely speaking to her. The most they asked was if she was in pain. Hilary stayed with her and compassionately cared for her. That community found this remarkable. It spoke volumes to them.

I thought the book as a whole was a remarkable story of love. I recommend it to you. This is the kind of thing that makes you want to be fully alive, to love. May we no longer live in fear of the journey.

This book was graciously provided by Waterbrook Multnomah Publishers for review.