Vikings, Berlinerkranser, & the King of Norway 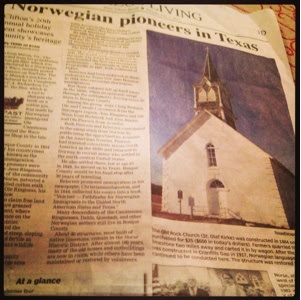 So, I'm a pretty big deal. Perhaps you didn't know. Case in point, my mom hands me this article she saved for me the other day about the church my great-grandpa helped build. He was a Norwegian settler by the name of Jens Jenson. In this article is a story about the King of Norway coming to visit the church and see the Norwegian settlement that is now known as the Norwegian Capitol of Texas. I said, "Hey, I was there that day." I turned to my husband with an air of self-importance and asked if I had ever told him about the time I met the King of Norway. I am sure King Olav V was quite taken with me. Sure, I was seven and I couldn't understand anything the man said, but I am positive he was overcome at our meeting.

Really, it was neat to me to grow up in this little area among people of the same heritage. There were so many traditions that we adhered to as a family and Smörgåsbords we attended. My grandmother had seven brothers and 6 of them were preachers. They prayed and conversed in Norwegian at every gathering. My grandmother used to make these traditional German wreath cookies, called Berlinerkranser, every year at Christmas. Since she is no longer here, I picked up where she left off and I make them every year for my dad, Big Daddy. (I love tradition, but I draw the line at lutfisk. Don't even ask me to make it.)

You can find this recipe on the web, but there is a secret ingredient that they left out. My guess is that since we hail from Vikings that we have to slip a little bourbon in our cookies. 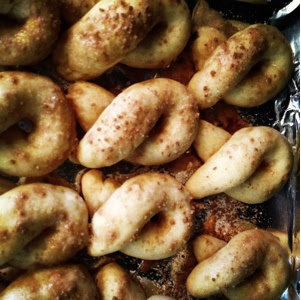 Peel the three hard-boiled eggs, remove and dispose of the whites, and crumble the yolks in a bowl.
Separate the raw egg yolks and whites. Mix the raw yolks into the bowl of crumbed yolks. Cover the bowl of whites and refrigerate for later use.
Cream the butter, sugar, 2 tsp. whiskey, and vanilla together. Stir the yolks into the butter mixture, then stir the flour into the butter mixture. Cover the bowl and chill the dough in the refrigerator for at least an hour.
When thoroughly chilled, pull the bowl of dough out of the refrigerator. Break off small chunks of the dough and roll them out into little strips, approximately 4 inches long and a quarter of an inch around.
Gentle bend the strips into wreaths and place on a greased baking sheet.
Preheat the oven to 350.
Just before putting them in the oven, brush the top of the wreaths with the egg whites and 2 tsp Jack Daniels. Sprinkle lightly with sugar.
Bake at 350 for 18-20 minutes. Crack one open and see if it is done. Gently remove from the baking sheet to cool.
Gud være med deg! 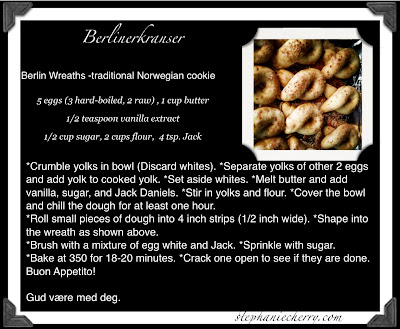 Buy Stephanie's photograph of this church on Etsy.