You Have Been Chosen To Rebuild 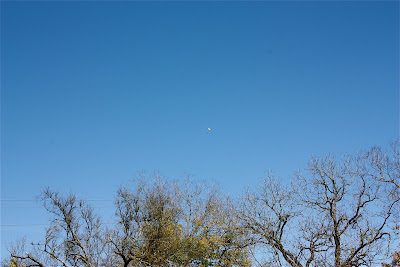 On Saturday we had an overwhelming 45 people show up to move and bless Gomer's House. It amazes me how God can bring people together for His glory. I am thankful to God for each and every person that helped and prayed on Saturday. 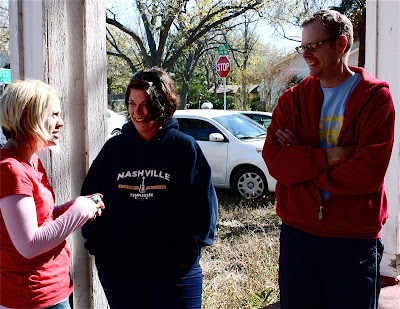 I love restoration. Over the past few years I have redone over 40 pieces of furniture. Something about it gets to me. It gives a physical symbol to a spiritual reality. Every square inch of our house needs to be restored . . . every square inch. God has already selected the people who will come restore and in the process be restored. I have begun praying a multiplied blessing on the servants God has chosen. 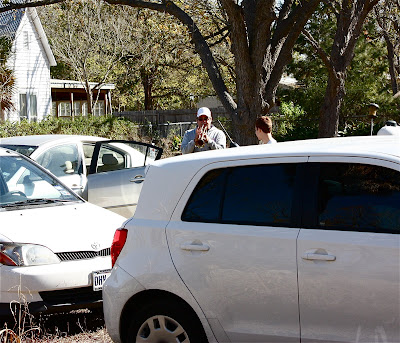 The trumpet blast has been heard. God sent a man to blow a horn on Pray day. Perhaps this means nothing to you, but to me it means more than I can say. A shofar (horn or ancient trumpet) was blown to rally the troops to a specific location. Felix had no idea that his trumpet playing would mean so much to me personally. The shofar also was used to announce the year of jubilee! http://en.wikipedia.org/wiki/Shofar 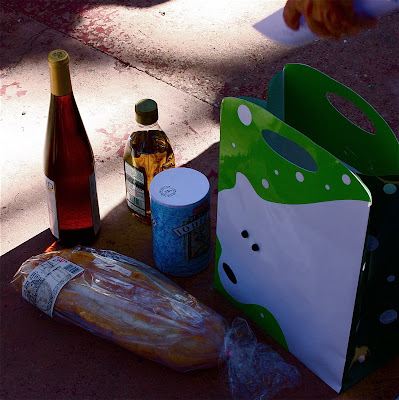 Shelley brought these items to symbolize a blessing she read over us and Gomer's House. I will post the blessing later. 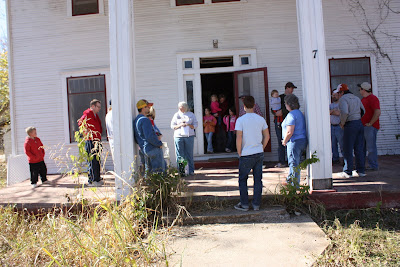 People gathering on the porch to pray. 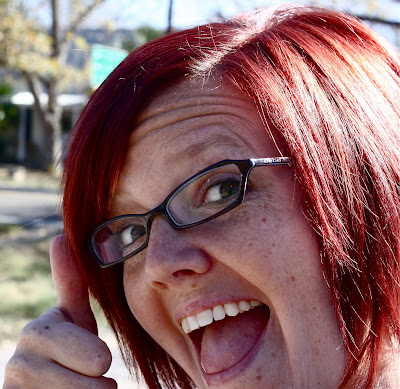 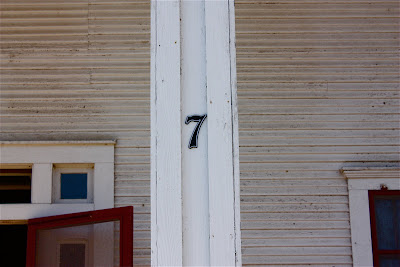 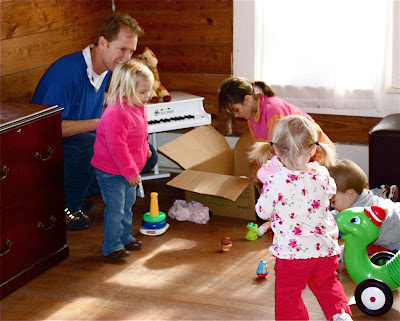 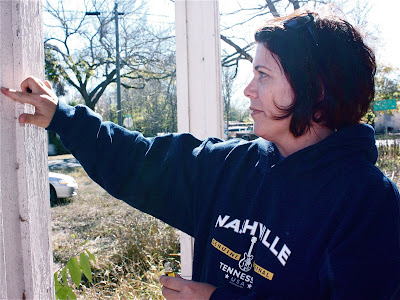 Anne anointed the house with oil. 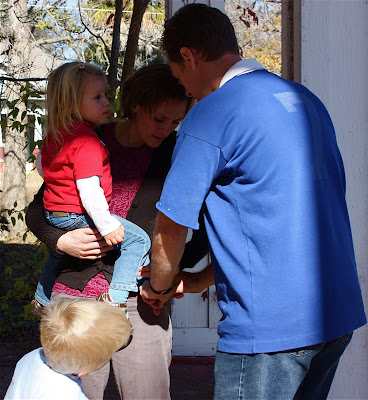 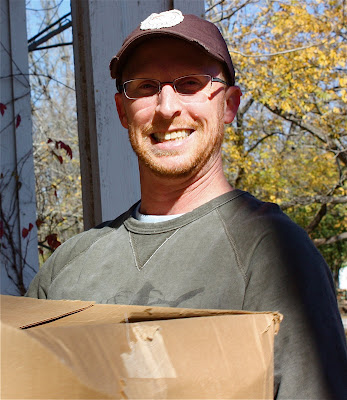 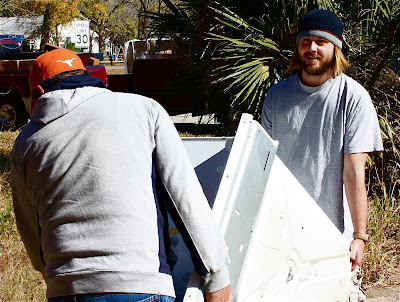 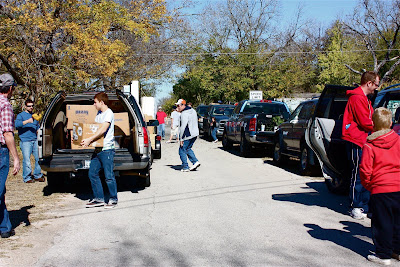 from Anne's blog:
Those from among you
Shall build the old waste places;
You shall raise up the foundations of
many generations;
Isaiah 58:12 (nkjv) 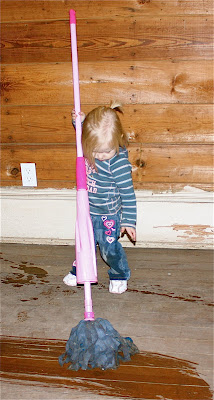 Laomai "mocking" the floor (in her words).

You are the ones chosen to rebuild.

Builders of the Wall

3 The Fish Gate was rebuilt by the sons of Hassenaah. They laid its beams and put its doors and bolts and bars in place. 4 Meremoth son of Uriah, the son of Hakkoz, repaired the next section. Next to him Meshullam son of Berekiah, the son of Meshezabel, made repairs, and next to him Zadok son of Baana also made repairs. 5 The next section was repaired by the men of Tekoa, but their nobles would not put their shoulders to the work under their supervisors. [a]

6 The Jeshanah [b] Gate was repaired by Joiada son of Paseah and Meshullam son of Besodeiah. They laid its beams and put its doors and bolts and bars in place. 7 Next to them, repairs were made by men from Gibeon and Mizpah—Melatiah of Gibeon and Jadon of Meronoth—places under the authority of the governor of Trans-Euphrates. 8 Uzziel son of Harhaiah, one of the goldsmiths, repaired the next section; and Hananiah, one of the perfume-makers, made repairs next to that. They restored [c]Jerusalem as far as the Broad Wall. 9 Rephaiah son of Hur, ruler of a half-district of Jerusalem, repaired the next section. 10 Adjoining this, Jedaiah son of Harumaph made repairs opposite his house, and Hattush son of Hashabneiah made repairs next to him. 11 Malkijah son of Harim and Hasshub son of Pahath-Moab repaired another section and the Tower of the Ovens. 12 Shallum son of Hallohesh, ruler of a half-district of Jerusalem, repaired the next section with the help of his daughters.

13 The Valley Gate was repaired by Hanun and the residents of Zanoah. They rebuilt it and put its doors and bolts and bars in place. They also repaired five hundred yards [d] of the wall as far as the Dung Gate.

14 The Dung Gate was repaired by Malkijah son of Recab, ruler of the district of Beth Hakkerem. He rebuilt it and put its doors and bolts and bars in place.

15 The Fountain Gate was repaired by Shallun son of Col-Hozeh, ruler of the district of Mizpah. He rebuilt it, roofing it over and putting its doors and bolts and bars in place. He also repaired the wall of the Pool of Siloam, [e] by the King's Garden, as far as the steps going down from the City of David. 16 Beyond him, Nehemiah son of Azbuk, ruler of a half-district of Beth Zur, made repairs up to a point opposite the tombs [f] of David, as far as the artificial pool and the House of the Heroes.

22 The repairs next to him were made by the priests from the surrounding region. 23 Beyond them, Benjamin and Hasshub made repairs in front of their house; and next to them, Azariah son of Maaseiah, the son of Ananiah, made repairs beside his house. 24 Next to him, Binnui son of Henadad repaired another section, from Azariah's house to the angle and the corner, 25 and Palal son of Uzai worked opposite the angle and the tower projecting from the upper palace near the court of the guard. Next to him, Pedaiah son of Parosh 26 and the temple servants living on the hill of Ophel made repairs up to a point opposite the Water Gate toward the east and the projecting tower. 27 Next to them, the men of Tekoa repaired another section, from the great projecting tower to the wall of Ophel.

28 Above the Horse Gate, the priests made repairs, each in front of his own house. 29 Next to them, Zadok son of Immer made repairs opposite his house. Next to him, Shemaiah son of Shecaniah, the guard at the East Gate, made repairs. 30 Next to him, Hananiah son of Shelemiah, and Hanun, the sixth son of Zalaph, repaired another section. Next to them, Meshullam son of Berekiah made repairs opposite his living quarters. 31 Next to him, Malkijah, one of the goldsmiths, made repairs as far as the house of the temple servants and the merchants, opposite the Inspection Gate, and as far as the room above the corner; 32 and between the room above the corner and the Sheep Gate the goldsmiths and merchants made repairs.

I tried mocking the floor once and it didn't look better and I felt silly, so I think it is a goo practice:) Go LuLu go! Nicole