While The World Watched by Carolyn McKinstry 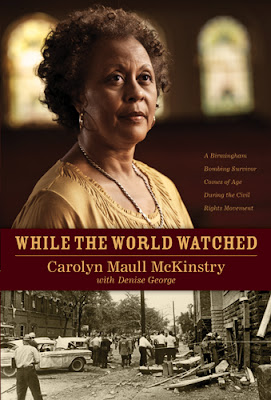 While The World Watched is a personal guide through the Civil Rights era by a woman who lost her four closest friends in a church bombing in Birmingham. This is a first hand account of what happened at that church that day and what it felt like to be a black teen during this time. She marched with and sat under the teaching of Dr. Martin Luther King. Narrowly escaping two bombings and losing those closest friends, she fell into depression and alcoholism which God delivered her from. This story is truly inspiring.
I was taken aback by the cruelty to black people as described in this book. Bombs went off around them all of the time. This was the first bomb to go off in a church. It killed four little girls, beheading one of them. As the congregants were outside in shock, white people in their Sunday best drove by laughing and singing, "2, 4, 6, 8, we don't want to segregate."
Emmit Till was tortured and tied to a seventy pound fan and thrown into a river for complimenting a white woman. When he was found, they did not even clean his body up before delivering him to his mother. She left the casket open so people could see what had been done to her son. A magazine ran an article describing the torture and they received death threats and hate mail. One person wrote in to say that is what had to be done to keep the negroes in their place.
There is much more than I can say. I was deeply touched reading Carolyn's personal account. It gave faces, names, and emotions to a story I was only mildly familiar with. What a testimony to the strength of a people to persevere and speak up. May we refuse to turn a blind eye to the atrocities around us today.


The sermon title on the sign outside the day of the bombing was from the book of Luke.
"Father, forgive them.
They know not what they do."


This book was graciously provided by Tyndale Publishers for review.