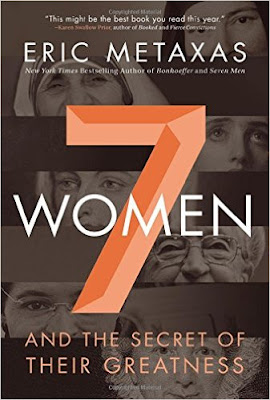 I took this read down to the beach last week. I stayed up one night until 2 a.m. to finish it. It was good. It is the follow up to Eric's 7 Men which I thought was exceptional. This book was more so to me. Perhaps I could better relate to it's characters or because it spoke clearly into things I am processing right now. I would go so far as to tell you that it is life changing.

First there is Joan of Arc. I honestly have no idea what to think of her and her chatting with dead people, but she was courageous and followed whole heartedly what she firmly believed God was telling her to do. The crazy things she stated came to pass. She never wavered in her commitment and was willing to challenge even the highest in authority in her kingdom face to face to do what compelled her.

I had never read anything about Susanna Wesley, mother of John and Charles. She was quite the intelligent woman and well read. She taught all of her children to read and educated them in the gospel with great passion. Their story took some crazy turns. He husband left her for a year over a political disagreement and then returned. They also had a strange demonic force of sorts that tormented them for a period of three months. It is documented in her letters to her boys who were at college. Beyond that, it leaves you with the feeling that what we are doing with our children is of the utmost importance. I loved her upon reading her story.

Hannah More was one of my favorite of the women. She was witty and smart. Hannah started a movement in her day that reached out to the poor and offered them education. It was called Sunday School, but it was more than what we think of today. It taught all the tenants of education to the poor who could not attend regular school due to needing to work. She also held great friendships with William Wilberforce and John Newton. She and Newton are the ones that encouraged Wilberforce to champion the abolitionist movement. Miss More was a genius of a writer taking on male contemporaries of her day and outselling them under a pen name. Her writing is credited with changing the culture of her day. She was a genius.

Saint Maria of Paris was one of the wildest stories in the book. Her past, divorces, annulment,  and then on to being a nun. She was in no way full of the religious ways of the church. She moved in with the poor and served them. Of course she did this amidst violent disagreement from the church. She could also be seen on occasion drinking a beer. "At the Last Judgment," she told her friend, Konstantin Mochulsky, "I shall not be asked whether I satisfactorily practiced asceticism, nor how many bows I made before the divine altar. I will be asked whether I fed the hungry, clothed the naked, visited the sick, and the prisoner in his jail."

Y'all know that I love Corrie ten Boom. I am ever moved by her simple, humble faith in Jesus. Her willingness to be subject to abuse in her middle age is striking. It convicts the heart. I have read much about Corrie and each time I come to love her a little more. As you read her story, you cannot help but love her sister Betsie. I want to be a Betsie. When Corrie would become angry at those around her (even when one beat her frail sister), Betsie would remind her to forgive and bless. After she was beaten and near death, Corrie was set out to attack the guard at the concentration camp. Betsie told her not to look at them or her and to look only at Jesus.

I thought the back story on Rosa Parks was interesting, but it really left me wanting to know more about her. It did show how long she had been fighting this battle of segregation. Her story is interesting. I thought that this section highlighted the movement of segregation more so than Parks herself. It was still fascinating.It shows us that sitting on that bus and refusing to move was the least of things Rosa did for her people. She was always giving and meeting for the common good.

Mother Teresa's story was compelling to me as well. Her controversial work among the poor and sick in Calutta is deeply moving. She moved in among the poor and invited other nuns to do the same. She lived among the slums and did not even have a bed for some time. She stated that she had given up all to attain this great prize of serving these people. She was given so much simply by asking those around her if they would like to do something beautiful for God. The Calcutta city authorities even gave her a large building to house the sick and dying as she cared for them. She was asked to open houses all over the world. She did. She even opened one personally for the Pope in Rome. She was a dear friend of Pope John Paul II. Her life is a testament to how God can use use the humble.

The book is an amazing read and I highly recommend it. It will greatly encourage you to press on into deeper areas of the faith.

This book was graciously given by Thomas Nelson Publishers for review.
Email Post