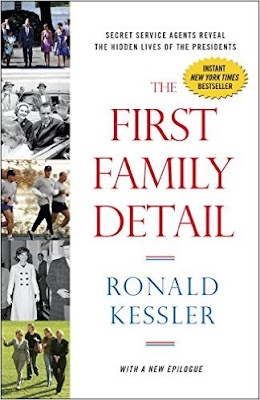 I picked this book to review because it is something my husband is interested in. It gave us some interesting things to talk about. It scarred me and gave me hope. I was not shocked at all about the ways of many of our presidents. We are well aware of their sexual exploits. I had no idea how far they went however and I am sure that this is only the tip of the iceberg. Clinton had several mistresses that showed up right when Hillary would leave. I never realized how much man power and money it costs our nation for these escapades. It also puts our country in great danger.

LBJ was the worst scoundrel. He hung around the White House pool naked giving orders to his secretaries. He also did this in front of his wife and children. He had a bevy of beauties ever at his service...even some of his friends' wives. People gave him permission to do this. He had women staying at his ranch with his wife there and would go be with them at night. I kind of want to throw up. Is this ancient Rome?

Jimmy Carter shocked me a bit. They said he was terribly fake and cared nothing about the things he was elected for. It was like he was a tv character, but behind closed doors he was a awful fellow. I read that Chaney is much the same.

Hillary's behavior really threw me for a loop. The Secret Servicemen consider it a punishment to be put on her detail. They refer to it as the worst detail you can get assigned to. She told them to never speak to her and hide behind curtains and in doorways so as not to bother her. When people would speak to her, she would tell them to "f" off. She too is a tv personality. They say she champions things in her speeches and mocks the idiots who believe her in private. I had an inkling that she was not nice, but I wouldn't have guessed she was such a villain. It makes one think of Cruella De Vil...saying she loved puppies only to make them into a coat.

Thankfully, there have been some nice presidents with morals and manners. Both Bush families were a delight to the Secret Service. My favorite to read about was Reagan though. He may have been the kindest and most genuine president to go through the White House. HE would invite agents to supper and invite them to hang out with him. He would make jokes and they say that he was an all star gentleman in front of the ladies.

The book was fascinating and disheartening. It also gave some hope for the human race. May God give us an honorable person to run our nation. It's an interesting read. Grab a copy.

This book was graciously provided by Crown Publishing for review.