Life, in Spite of Me by Kristen Anderson 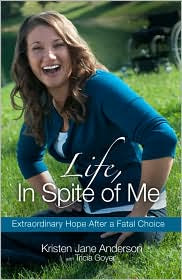 Life, in Spite of Me is Kristen's story of healing from a suicide attempt. It was no ordinary attempt either. She laid down on a railroad track and was run over by 33 freight cars on a speeding train. She should have naturally been sucked under the train, but she felt something holding her down. Later, she realized that force was the hand of God.
This book deeply ministered to my spirit. As I read how her struggles and battles loomed over her and God gently led her about, I was grateful to be reading it. I have my legs, but I have lost a lot of things in this life and I could identify with every word she said. Even in her struggle to learn to walk on prosthetics, God infused me with hope and courage.
The most frightening and poignant part of the story was when Kristen realized that she would have gone to hell if she had died and God saved her. She had been in church her whole life, but never accepted Jesus as her personal Saviour. Because of her discovery, God led her whole family into a relationship with Him. God can use the most overwhelming circumstances to draw others to Himself and bring glory to His name.
Buy this book.
This book was provided for review by the WaterBrook Multnomah Publishing Group
at May 17, 2010

Email ThisBlogThis!Share to TwitterShare to FacebookShare to Pinterest
Labels: Books

Wow, what a story! I can see this book helping and blessing the lives of a lot of people. Thanks for making it known. wb