I’ve Seen the End of You by W. Lee Warren, MD 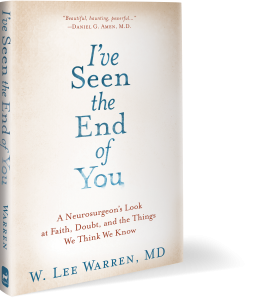 I've Seen the End of You: A Neurosurgeon's Look at Faith, Doubt, and the Things We Think We Know by W. Lee Warren
My rating: 5 of 5 stars
I thought this book was going to be more about diseases of the brain. I thought it could help me to understand things going on within the minds of my family members. What I found was something I could barely put down. This is a book about a neurosurgeon who struggled with faith and prayer as he performed surgery on tumors that were almost always fatal. His honesty is compelling.

Let me be honest. If you like nerdy scientific information about the brain and your heart being ripped out by story, this is the book for you. This is about a man who started writing as a way to deal with the horrors of war that he saw as a surgeon of war in Iraq. He then kept writing as a way to deal with his feelings on faith as he operated on Glioblastoma, treated trauma victims, tried to save brains ravaged by suicide. Then he used it as a way to shepherd his own kids through pain and loss. It’s riveting.

I have seen so many of my family members die. It is a sacred space. I cannot imagine walking through or carrying the weight of being present during death nearly every single day. Lee has so much on his shoulders. Instead of going through the motions of it all, he has thought deeply about what he was dealing with and wrestled with God through it all. It gave me quite a bit to chew on and I came away with so much. I am thankful for the hard work that was put into this. I am thankful for the perspective that he had when he realized how we are all very much the same at our core. Fantastic. 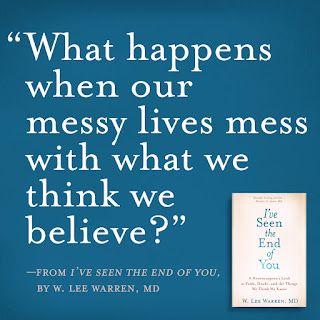 This book was graciously given to me by the publisher for review.