I read Get Out of That Pit by Beth Moore 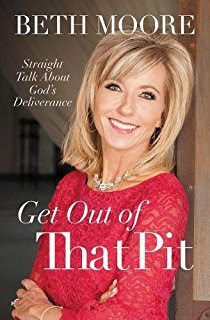 Beth just rereleased Get Out of That Pit for it's 10th anniversary. I had read it before when it was initially released, but decided I could probably stand to read it again. I read a lot of books, around a hundred a year. I don't always remember every detail of them, but I did in this case. I remembered nearly every part of this book. I remembered it so well that I could tell you where I was sitting in my house ten years ago when I read different chapters. That tells you that it had a profound impact on me.

I think this book is full of power. It is desperately needed still, a decade later. It is a current word to the church. I think so many of us in the body of Christ are ill-equipped in handling the misdeeds of others that we unintentionally shame them into a pit. How rare is the hand that acknowledges sin and still offers a hand up.

Now, one thing I love about Beth Moore is that she never wavers of her tireless preaching of the sovereign power of God. She makes no bones about the fact that we are unable to deliver ourselves. Only God can deliver us. She covers the several different ways that we get into pits and the only way we get out. Christ.

I could identify with much of this book. I have been thrown into a pit and I have thrown myself into a pit. I lived there for decades. Recently, I realized that I had been feeling stuck because I spend so much time caring for others that my own body and soul were depleted. It's not the pit that child abuse threw me into or the one I threw myself into repeatedly as a result, but it was something I needed to see. I needed a hand up. I needed more time with my heavenly father. I needed reassurance of His love. A decade after my first reading, I learned a new lesson.

This book was graciously provided by Thomas Nelson Publishers for Review. 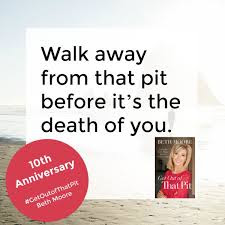