Keepers of the Covenant by Lynn Austin 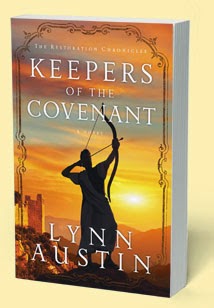 This is the second book in Lynn Austin's new series The Restoration Chronicles. I enjoyed this book immensely ... all 476 pages of it. I have read and heard the story of Esther many times, but always from the view of one sitting in her courtyard. This story gives you the historical background for the entire Jewish kingdom. It tells of what happened in Babylon where many of the Jews were still in exile. I thought it was a fascinating portrait of what these people endured and the depth of their trials.

We see how the decree led Ezra to be over the Jewish exiles of the time. The underbelly of the story shows how God used this to start journey that would lead many of the Jews to return to Jerusalem. We also see how many were so entrenched in Babylonian customs that they refused to leave. I thought the portrait of the beautiful people of God assimilating into the pagan culture was such a trumpet call to our day.

I loved this book. Sometimes I think Christian fiction is written for school age children. It is so overdone that it is ridiculous. I enjoy Lynn's writing. This is my second series of hers to read. The first is The Chronicles of the Kings. I highly recommend it as well.