Walking in the Dust of Rabbi Jesus by Lois Tverberg 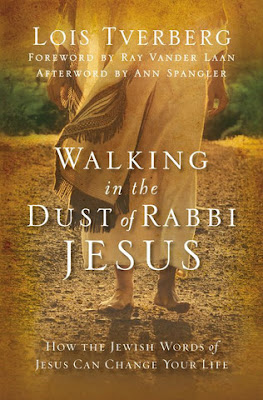 A few year's ago a friend lent me the book Sitting at the Feet of Rabbi Jesus written by Ann Spangler and Lois Tverberg. I think I underlined 80 percent of that book. When I saw this book was coming out, I added it to my Amazon wish list and someone gave it to me for my birthday.

I have really enjoyed reading it. It continues to fascinate me to read about how the words Jesus spoke would have been perceived by His Jewish audience. I had always wondered about the depth of the meaning in Matthew 6 and Luke 11 where Jesus talks about a good eye and a bad eye. In the Jewish culture, the good eye was symbolic of a generous man and the bad eye of a greedy one. To the Jewish audience, the body would be full of light when the heart was generous.

One other story I thought was so interesting was when the Pharisees were trying to trap Jesus by asking him if they should pay taxes. Jesus then asks one of them for a denarii. To the Jews, denarii were forbidden to be used and carried because they bore the graven image of a man who demanded that they worship him. The rabbi that pulled the denarii from his pocket would be humiliated when he realized what he had done because it showed how insincere he was about worshipping God. Jesus tells them the famous lines to give to Caesar what is Caesar's and to God what is God's. This would have conjured up specific imagery for them because there was always great discussion about them being in the image of God. Jesus was telling them that God desired people to be brought to him.

There is page after page of amazing insight in this book. I wish I could share them all. The only thing that I missed was Ann Spangler's depth of writing that made the first book so powerful to the reader. That being said, this is a fascinating read that will help you see the God of the Old Testament and Christ synonymously. It brings the clear directive to the Old Testament listeners that God craves compassion from us for others. Cover to cover He is a God of love.