We must teach others empathy for all humanity.


I read The Diary of a Young Girl and the Hiding Place in eighth grade. I can vividly recall the shock I felt sitting in my desk as our class read the books aloud. I had seen much of the underbelly of humanity at that age, but it was still so shocking. In fact, I am still processing it nearly thirty years later. Over a decade ago, I received a box of my great grandmother’s books. In it was a copy of Corrie ten Boom’s book entitled In My Father’s House. It was my favorite of her works. Do you know that she wrote nearly 50 books as she traveled the world and shared the gospel? One year, I read as many as I could find still in print. I’m still finding them. 20 or so that I’ve read. Her books on her life before the Holocaust are so rich. She talks about how her Papa ten Boom instilled a deep love of Jewish people. She learned how to simply teach the gospel by mentoring hundreds of young women and volunteering in a hospital for handicapped children. Even in death, she mentored my heart. Here are some other books I’ve read lately that have further opened my eyes to the horrors of Holocaust and what drives man’s spirit to an intrepid overcoming. The Brothers of Auschwitz, All the Light We Cannot See, The Tattooist of Auschwitz, Out of the Depths, The Lilac Girls, A Man’s Search for Meaning. #internationalholocaustremembranceday #neveragain #books #📚#reading #readinggrowsempathy
A post shared by Steph Cherry (@heystephcherry) on Jan 27, 2020 at 10:06am PST 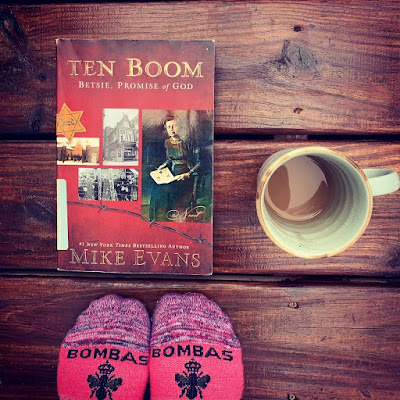 The Brothers of Auschwitz: A heartbreaking and unforgettable historical novel based on an untold true story by Malka Adler
My rating: 4 of 5 stars
It took me to a few chapters to get into a groove with this writing style, but once I did, it got ahold of me. This story is told how you would hear it in an interview. The text is choppy as if you were listening to someone recount a deeply heard memory. I have read quite a bit from he WWII era, but this gripped me int he pit of my stomach. It’s truly shocking to see how humans can behave. The babies hot me hardest. They would hit them in the head with the butt of their rifle and throw them in the pile. One recounted tale told about the soldiers playing kickball with a baby until it died.

As with every horrific recounting of these times, I found myself staring at the words on the screen. How did humanity ever get to that point? How were so many people convinced that it was a good thing to treat human life as refuse? How do we keep this from ever happening again? How on earth did these people survive this?