A Million Miles in a Thousand Years by Donald Miller 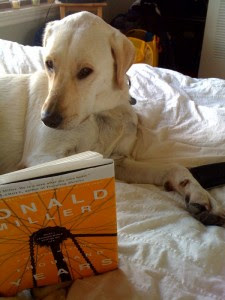 I must confess something to you. I have a literary crush on Donald Miller. I have never gone through a book he has written unchanged. I laughed, I cried, I wanted to leave the book different. I wanted to get to the end of the book, but I did not want the book to end. I fell into literary love in Blue Like Jazz and have been shaped as a human being in part by his story telling.
The subtitle of this book is "What I learned while editing my life." As Donald began writing a screenplay from Blue Like Jazz, he learns about story and the art of story telling. We see him contemplate if his own life is a good story and follow him on his decision to make it one.
There were things I gleaned from this book. One thing is that it is very important who you hang around. If your friends have boring stories, you probably will too.
"Somehow we realize that great stories are told in conflict, but we are unwilling to embrace the potential greatness of the story we are actually in."
I learned about how much conflict adds to the story. It makes room for a hero, an overcomer. The stories we are most attracted to are about people who have beaten the odds. Why then do we panic when the odds show up? The conflict is what changes us. It molds us. "Every conflict, no matter how hard, comes back to bless the protagonist if he will face his fate with courage." When we stop expecting God to end all of our troubles, we will be surprised by how much we'd like spending time with God.
"...I was a tree in a story about a forest, and that it was arrogant of me to believe any differently. And he told me that the story of the forest is better than the story of the tree."
Truth be told, I had it set in my heart to change my story some time back. I started praying for and asking for hard things. I wanted to join in on other people's struggles and intertwine our stories. I wanted to give something to someone instead of hording it for myself. I am hoping that as the story of my life is written out that it changes and inspires you to give something and to take the hard road for the sake of the change it will produce.
Donald was sharing his theory on how our lives are like stories that others watch play out with a friend. That friend had a young daughter who was struggling with drugs and a dangerous boyfriend. After much contemplation, the man realized he had not written a good story for his family to follow. They were going through the motions of life. He then felt led to pay to build an orphanage in Mexico and got his family involved in raising the money and going to visit the people there. Shortly after this, his daughter stopped using drugs and broke up with her boyfriend. Her father had showed her how to be the hero of her own story and it changed everything."
This book has easily made it's way onto my top ten list.
A Million Miles In A Thousand Years by Donald Miller
at October 13, 2009

i love donald miller, and my friends make fun of me because they say that theologically he is not correct. i say he is a great storyteller, and offers a new perspective on how Jesus lived. have you read vintage Jesus by Driscoll? i haven't yet, but i hear it's good.

I would make fun of those friends. I don't think he has purported himself to be a theologian or even mentally healthy. I think he writes with great humility and poetry about the journey. It's inspiring and makes me want to live a different life.

I have not read Driscoll's book. Let me know if you read it and what you think. He's a controversial one too, but I guess . . . who isn't?