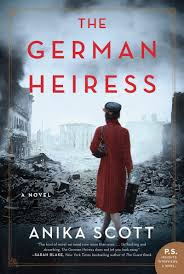 The German Heiress by Anika Scott
My rating: 4 of 5 stars

This is an interesting and different view of WW2 from the vantage point of the German business owners and citizens who were threatened to comply with Hitler’s army.

I had a bit of trouble getting going with this story. I’m not sure if I didn’t like what was happening or if the beginning didn’t flow to me. After I paced my way through those initial pages, the story ramped into high gear. I don’t want to issue any spoilers, but I was overwhelmed to see how the war had such an effect on everyone around. It was incredibly easy for people to be killed simply because someone said they were involved in a crime against the Reich. Businesses were forced to comply and use forced labor. After the war, people were left to live in bombed out houses and were in fear of the people who came to rescue them from the Nazi regime.

I read that this debut novel was meticulously researched. I couldn’t find what our author researched. I do not know if it is based on actual events or simply things that might or could have happened during this time. The writing is engaging and the story keeps you locked in. It’s definitely one that is hard to put down.