Hello Stars as reviewed by Lulu

My Lulu and I received a book to review from the publisher. If you know her, you know she read this 6 times the week she received it. I had her write out her synopsis of the book. Mostly, she loved that it was written by a girl not much older than her. 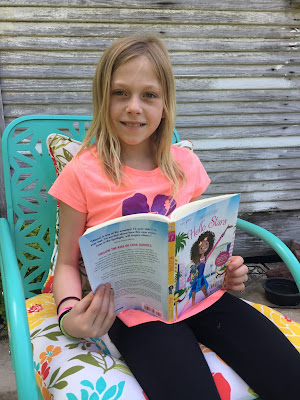 Hello Stars is a great book. It's about a girl named Lena Daniels. She has three little sisters. There's an 8 year old named Ansley and 6 year old twins named Amber and Ashton. 28 days before school ends, her friend Savannah, went to her, Lena, and their other friend Emma's favorite singer, Mallory Winston's concert. Savannah tells Lena that Mallory is going to be in a movie and wants a girl between the ages of 10 and 12 to be in it with her. All they have to do is make a video talking about themselves and send it to Mallory Winston. Lena's video doesn't go so well because she has fruit snacks between her front two teeth. Mallory picks her anyway. She has to be in Los Angeles for 3 months and her whole family comes with her. Through the filming her family meets Kay who does her hair and makeup as well as Mr. Fenway who films it. The movie is called Above the Waters. It's about a mom, grandma, and daughter. All is fine until the grandma gets sick and the family is struggling to cope with the news. Then the daughter meets a woman named Nicole who helps the family cope with it. They learn to trust God in every condition. Lena plays the daughter who is 10 and whose name is Jennifer. Mallory plays Nicole.

"I loved this book and cannot wait to read the next one." -Lulu