Signs, Wonders, and a Baptist Preacher by Chad Norris 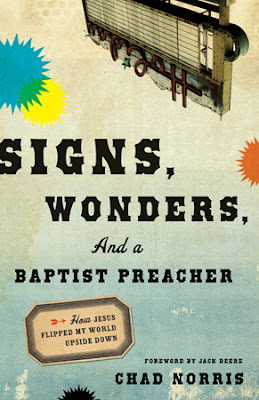 Well, I read this book. When, I saw the title, I said, "Okay, I'll bite." I must say that I am not in any way a cessasationist. I believe that healings occur by the power of the Holy Spirit. Now, with that said, I struggled through this book. My quick rundown would be angry rant, how he met his wife, angry rant, contradiction, weird connections, short exhortation.

First off, Chad goes on with some bitter diatribe about someone telling him that God took his grandpa home to Heaven so he thought God was mean. His rant was about people tell you that your suffering is for the glory of God. Skip past the nice marital story and Chad himself tells you that God uses suffering for your good. Which is it? He does or He doesn't. Perhaps Chad should write about forgiving the person that gave him the message he misread and repenting before God of how he viewed Him.

Chad tells us how he doesn't like big showy healings, but most of the people he reference in his book are into that very thing. It is quite confusing. The end was a good exhortation in trusting God to be what He is, supernatural. As a whole, I didn't really enjoy it. I found it to be a muddled bunch of confusion. I do agree that God can do much more than we are asking of Him. On that, Chad is right. We should challenge ourselves to do what Christ told His disciples to do.

This book was graciously provided for review by Baker Publishing Group.